The great capricorn beetle, Cerambyx cerdo, is a beetle that belongs to the family of longhorn beetles Cerambycidae. For the past 50 years, the species has only been present at one location in Sweden. In Life Bridging the Gap, the reintroduction of the great capricorn beetle is an important measure because it is a keystone species that creates habitats for many other species. Breeding of great capricorn beetles that originate from the population at the Halltorps Hage Nature Reserve takes place at the breeding facility at Nordens Ark. Text: Jonas Hedin 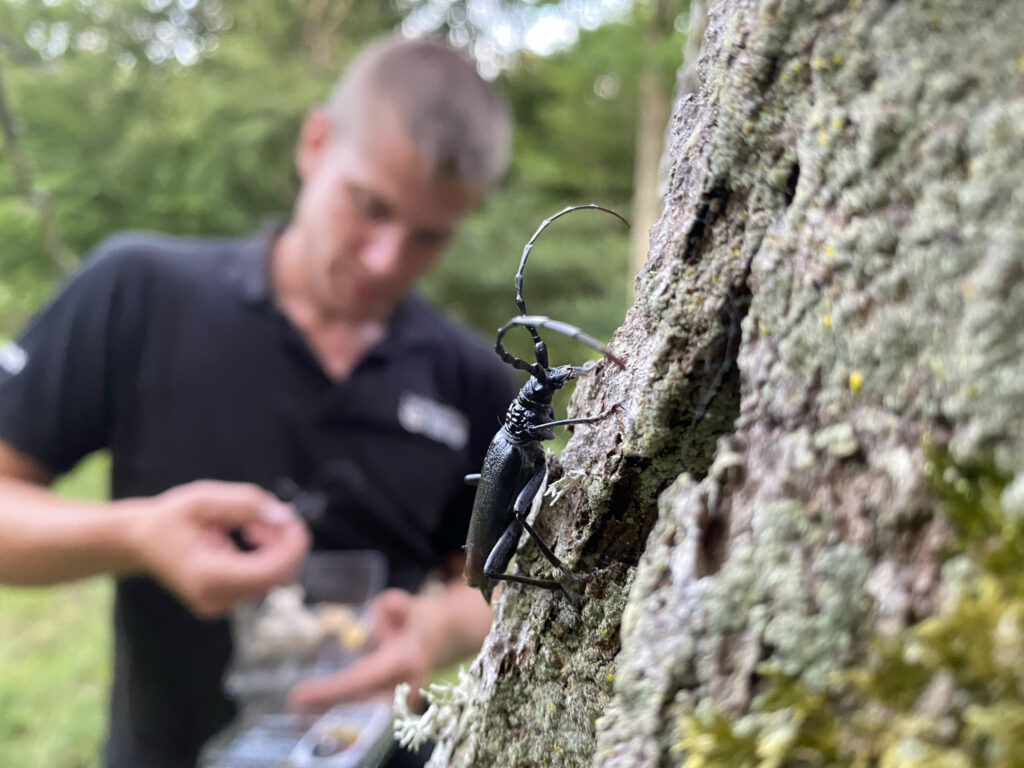 The larvae develop in very old, living, oaks with coarse bark that stand in sunny locations. The species seems to be able to live in these oaks for centuries. The great capricorn beetle can also colonise middle-aged, severely stressed oaks with poor vitality. In most cases, the oaks die after a few years, but there are also cases where the stressed oaks have been revitalised and the beetle larvae have died in the stressed oaks probably due to unfavourable conditions caused by high levels of tannins.

The development of the larvae, which takes place underneath the bark and in the sapwood, is believed to take five years in Sweden. In the late summer of the year before the year when the adult beetle (imagines) is to leave the oaks, pupation takes place in a pupal chamber deep inside the trunk of the oak. But before this occurs, the larva gnaws a tunnel all the way to the bark. Then in June of the following year, when the adult beetles leave the trees, the beetle gnaws through the bark, resulting in traces of red-brown frass at the base of the oak. Mating and egg-laying occur immediately.

The species has declined in Sweden

We do not know for certain why the great capricorn beetle became extinct on the mainland. But the most likely reasons are the removal of hundreds of thousands, perhaps even more than a million, old oaks from 1830 and onwards (see the chapter on the oak in history), the regulation of water- courses (which stopped flooding of the riverine woodlands) and a general overgrowing of grazed oakwoodlands. Before the watercourses were regulated, at for instance Emån and Alsterån in eastern Småland, there were probably plenty of old oaks that survived the annual floods, which other tree species like spruce did not.

These old oaks were sun-exposed, and grew close to the streams and in alluvial meadows. They were good habitats for great capricorn beetles. At Emån and Alsterån it is still possible to find old oaks that remind us of this lost type of habitat. Similar areas still exist in some parts of Europe, for instance near Rogalin in central Poland, by the Warta River. Here there is still a large population of great capricorn beetles in the enormous oaks that grow in meadows subject to heavy annual floods, meadows which are still cut for hay.

The larvae tunnels in the hard wood create habitats for other species. For instance, a study in Poland shows that bats, Nathusius’ pipistrelle Pipistrellus nathusii, appear to spend the winter in tunnels made by great capricorn beetles. According to another study from central Europe, oaks where great capricorn beetles live are home to more species of saproxylic beetles, including several red-listed species.

Great capricorn beetles are bred at the breeding facility at Nordens Ark. Nordens Ark is a non-profit foundation that works in conservation, breeding, research and education, and sharing knowledge about biodiversity. Here, the beetles reproduce in terrariums containing pieces of oak with coarse bark, where the female can lay her eggs. Mating and egg-laying occur every day, and by feeding the beetles with a nectar solution and fresh fruit, their lives as adult beetles can be extended by several months.

The pieces of oak where the female lays her eggs are searched regularly. All the eggs that are found are collected, and after a few days the eggs hatch and each larva is placed in a separate Petri dish. The dishes are filled with special food mixture consisting of oak woodchips and a nutrient-rich powder. The larvae are checked several times a week, and the food mixture is changed regularly to ensure maximum quality. After every growing season, the larvae hibernate for two months at a temperature of four degrees. After only about two years, the larvae are large enough to develop into pupae. In the wild, great capricorn beetles have a larval stage of four to five years, but with this breeding method, this period can be shortened. After a month as pupa, the metamorphosis is completed, but before it is fully developed, and in order to be fertile, it must remain in its pupal chamber in the Petri dish over the winter.

After the great capricorn beetles are taken out of hibernation, they are fed and have the opportunity to mate. This optimises the chances that they will start laying eggs on the oaks as soon as they are released. The adult great capricorn beetles that are bred are generally about 10-15% smaller than those that have developed in the wild. About 15% of the captive-bred adult beetles have deformities, mainly on their wings and antennae. The cause of this is not known, but handling the pupae is a very sensitive procedure and it is possible that some individuals are damaged.

Since 2018, once a year, adult individuals that are bred at Nordens Ark are placed out in the two project areas at Björnö and Tromtö-Almö, in the counties of Kalmar and Blekinge, respectively. The sites are located in the former habitat of the great capricorn beetle, and the placement of the beetles is an important measure in the national action plan for the species. The long- term goal is to re-establish the great capricorn beetle in four different oak landscapes. The aim is that by 2040, the Swedish population will consist of more than 500 adult individuals per year.

Because the larvae take so long to develop, we have not yet been able to monitor exit holes made by great capricorn beetles in the project areas where they have been reestablished.

At the Halltorps hage nature reserve on Öland, the population has been monitored since 2004 by monitoring fresh exit holes. The population is steady at a low level of between 20 and 50 adult individuals per year. The entire population lives in three large ancient oaks and in a few younger, stressed oaks. There are great capricorn beetle larvae in a maximum of ten oaks at any one time.