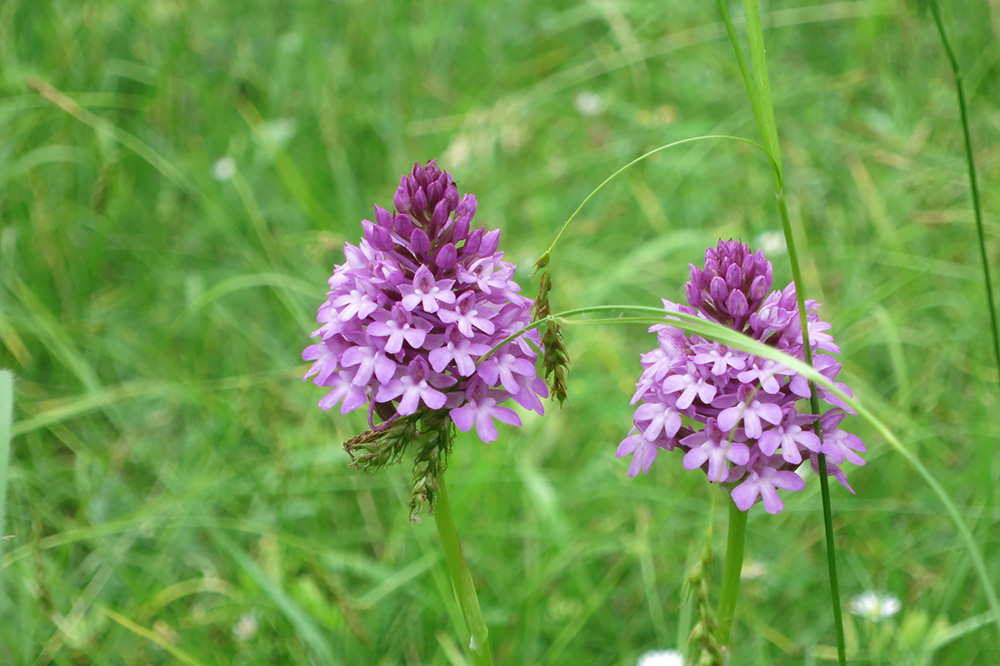 In the project Life Bridging the Gap, 90 hectares of grazed oak woodland and a few hectares of hay meadow were restored. The challenge was to implement the measures while respecting the high cultural-historical values and the presence of a great many redlisted species. An additional challenge was to find contractors to work in a location so far away from larger centres.

The areas restored differ considerably in character, which affected the design of the restorations.

Because large areas were to be restored within just a few years, good planning was essential – not least because the land at Horn has been used by humans since the Iron Age and therefore has remnants of extensive systems of collapsed pre-historic stone walls, ancient fields, house foundations and graves. In order to respect the cultural-historical values in the best possible way, a consultant in cultural history was engaged; aims here included identifying suitable routes for removing materials. The restorations were planned in consultation with species experts, with the aim of creating variation in the areas restored.

The restoration work was mainly done using handheld tools such as chainsaws and brushcutters. Waste from clearing was removed with a small forwarder or tractor trailer. Some work used a small harvester.

Prior to the measures, this area was completely impenetrable with hawthorn, so one had to force one’s way through the growth. This made it difficult to get an oversight of the area. The bushes were interspersed with old oaks, some providing homes for hermit beetles.

With the exception of large hazel bushes, everything that grew under the oak crowns was removed. Because there were so many bushes, it was possible to create glades and winding woodland edges. The result: borders of hawthorn, creating a warm and favourable microclimate between the oaks. The flora has recovered quickly, for instance with lots of salep.

In the centre of the reserve, there is a 50-hectare grazing enclosure with a long continuity of grazing. Some old oaks and many low broad-crowned oaks grow here. Running through the area are long eskers, i.e. ancient deposits of rocks, with unique fungus values.

The objective here was to achieve a mosaic structure with a blend of completely open areas, somewhat more closed areas, and distinct glades with a rich bush stratum. Oaks were cleared around, by felling or ring-barking competing trees. Wetlands were cleared of thinner trees, and to the south, bushes were also removed, to let heat in. To the north, more bushes were kept, as protection against the wind.

As a result of Chalars ash dieback disease and Dutch Elm disease, there are plenty of dead trees. Larger dimensions of dead wood were left, spread out or collected in “fauna depots” (dead wood left on the ground with the aim of increasing biodiversity). When oaks were felled, the trunks were left in place on the ground, or were used for stag beetle facilities. In the restorations, living ashes were favoured.

In the southwestern part of the reserve is a 15-hectare wooded meadow criss-crossed by a number of collapsed pre-historic stone walls. Before the restoration, a lot of brush had grown up in these walls, in house foundations, along intact stone walls, and in the groves between the meadows. The hazel bushes out in the open areas had grown very wide. Less and less of the meadow area had been cut.

The foundations were cleared, and brush was removed from the collapsed pre-historic stone walls. Lindens were re-pollarded and younger lindens were selected as replacement trees for the trees that unfortunately had died. In the groves between the meadows, oaks and older lindens were cleared around, and brush was removed. Solitary hazel bushes out in the meadow were trimmed back, so more sunlight could reach the vegetation. The flora is very rich in species, with many orchids.

To ensure that collapsed pre-historic stone walls were not damaged when hauling out the cleared material, archaeological experts were engaged in the planning of the removal routes. The stumps in the meadow were then ground down so the meadow could continue to be cut with a mini cutter bar.

The project has made it possible to devote attention, financial resources and time to undertaking extensive and much-needed restorations. The restorations have been careful, and in several sub-areas are an initial stage in the restoration work.