05. a – Restoration on Islands

East of Tromtö in the Blekinge Archipelago are the islands of Östra Råholmen, Västra Råholmen and Ringholmen, which belong to the Tromtö Nature Reserve, and the island of Haglö – a Natura 2000 site. Restorations have been carried out here to varying degrees, but since the sub-areas consist of islands, the work was demanding. Text: Annika Lydänge 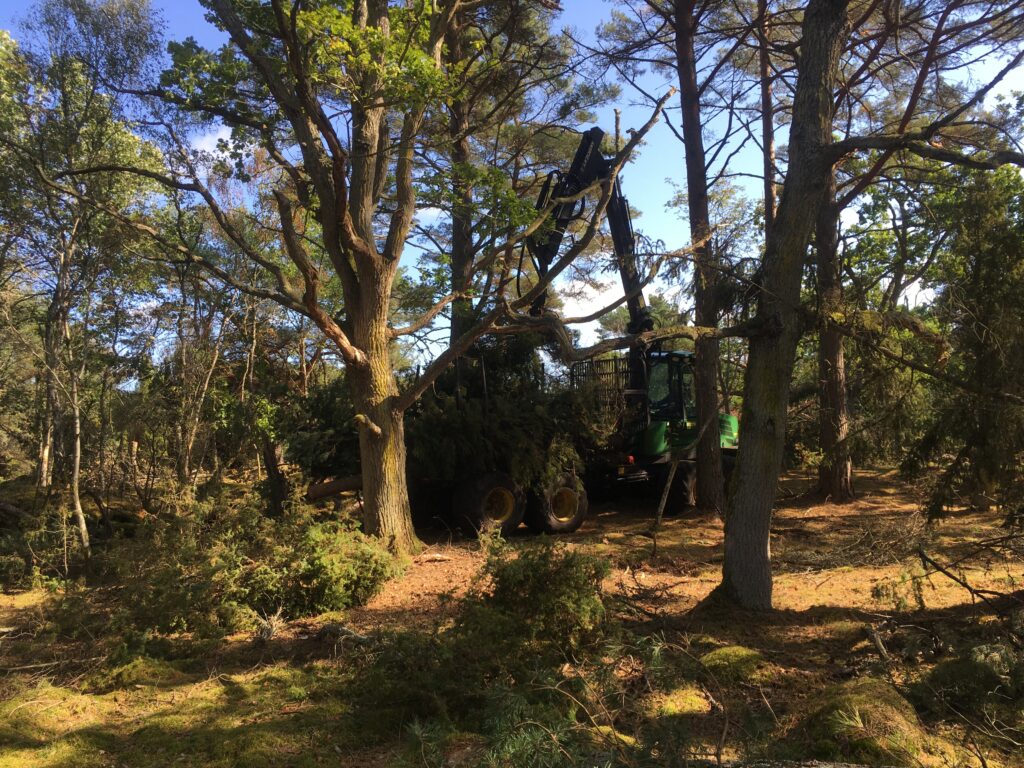 Through Life Bridging the Gap, 34 hectares of oak pastures have been restored in the islands. Some of the challenges of the project have been the need for thorough planning, consideration of endangered species, and finding a suitable level for the restoration.

This part of the coastal region is characterised by deciduous broadleaf woodlands and grazed oak pastures extending right to the sea. Here, the mild coastal climate has created unique conditions for rich biodiversity. The massive oaks are home to species such as the hermit beetle, the hairy stag beetle, the variable chafer and the stag beetle. The islands vary in character, but have high oak values.

In coastal areas, it is important to consider windscreening, for instance by retaining protective bushes by the shore. This makes for a warm microclimate in glades, despite the cooling maritime wind, which benefits species reliant the old oaks. On the islands by Tromtö, the degree of overgrowth varied between the islands, so measures were adapted in accordance with the conditions on each island.

Restoration on islands requires good planning, both in terms of logistics and implementation. On Tromtö, the first stages of restoration took several years, before it could be implemented. Some of the islands had been overgrown for a long time. Therefore it was important to find a balance: not doing too much at one time, but as much as possible, because the work was expensive. Also, the islands very high natural values to consider. Therefore the restoration and measures were planned together with several experts.

The islands are surrounded by shallow water, leaving few options for going ashore. Finding suitable locations is made even more difficult by the need for open spaces for placing materials. So we chose early on to investigate water depths and mooring locations together with a barge provider.

The islands were visited multiple times before the measures were started together with the contractors for the barge, the restoration, and subcontractor for, among other things, the wood chips. This was important for planning the last stage, and to agree on details of the implementation.

Basically, the restoration work was done with manual felling, using chainsaws and brushcutters. Scooters and chippers were transported to and between the islands by barge. Chipping was done on the islands, and the barge was used to transport the chips ashore in containers. With a tractor, which was also transported by barge, the containers were loaded and unloaded on the islands and the mainland.

Haglö is mostly made up of oak pastures, as well as some rocky areas, and has long been grazed. Here, almost only juniper were felled. Much of the island consists of dense, almost impassable juniper stands. Scrubby, “ugly” junipers growing along the ground were removed. Smaller numbers of solitary junipers and large groups of bushes were left. Glades were extended and new ones created, and clearing was done around the oaks. Some spruce and younger oaks were felled; the trunks were left in the area but branches were removed. The result was a pasture with varied canopy cover. Because there was still grass left on most of the ground, the results were very good; in most places it looks as if it has always been as open as it is now.

The island of Östra Råholmen was not particularly overgrown because it had been grazed in recent years and the grass layer was still present on much of the island. For this reason, the entire restoration of the island was done during this measure. The rejuvenation consists almost exclusively of oak, which means there are lots of young oaks on the island.

On the islands of Västra Råholmen and Ringholmen, the overgrowth had advanced much more. A lot of beech had grown up and the grass cover had disappeared, except for in patches and in small glades.

On these two more overgrown islands, restoration was done as a first step towards the final result. The plan is to do more work in a couple of years when the trees have got accustomed to the more open conditions. Also, clearing will have to be done around more young oaks, to create more broad-crowned trees.

With restoration, the most urgent issues were addressed: beeches that had grown up into the crowns of the old oaks were felled, and glades where there was still some grass and flowers were enlarged, to give these plants room to expand. A large number of beeches were ringbarked, firstly to create dead wood, and secondly to slow the clearing process around the oaks a little. Also, dead wood was left on the site, in the form of high stumps and fallen trees.

The most important conclusions from the restoration work on the islands concerns the importance of planning and preparation.

Documentation for use in procurement must be well thought through, and clearly state who is responsible for what. Engaged and flexible contractors are also important, to ensure that the work proceeds smoothly and the final result is good. If numerous contractors are involved, coordination between them is important, for instance so that the manual work is done in a way that facilitates for the contractor operating the forwarder. A long-term approach and the funding from the Life project mean that we “dared to” address these areas, and the experiences have enabled us to continue implementing similar measures in future. Because restoration through Life Bridging the Gap is a first step on two of the islands, we need to return within a few years in order to save the old oaks and so that rejuvenation can get under way.