The oak family Quercus became established in Europe 55 million years ago. Today the oak is one of Sweden’s most common deciduous broadleaf trees – but oak landscapes now cover just a fraction of their previous area. Although oak numbers have fallen dramatically over the past century, there is still a chance to conserve our species-rich oak landscapes. Text: Jonas Hedin 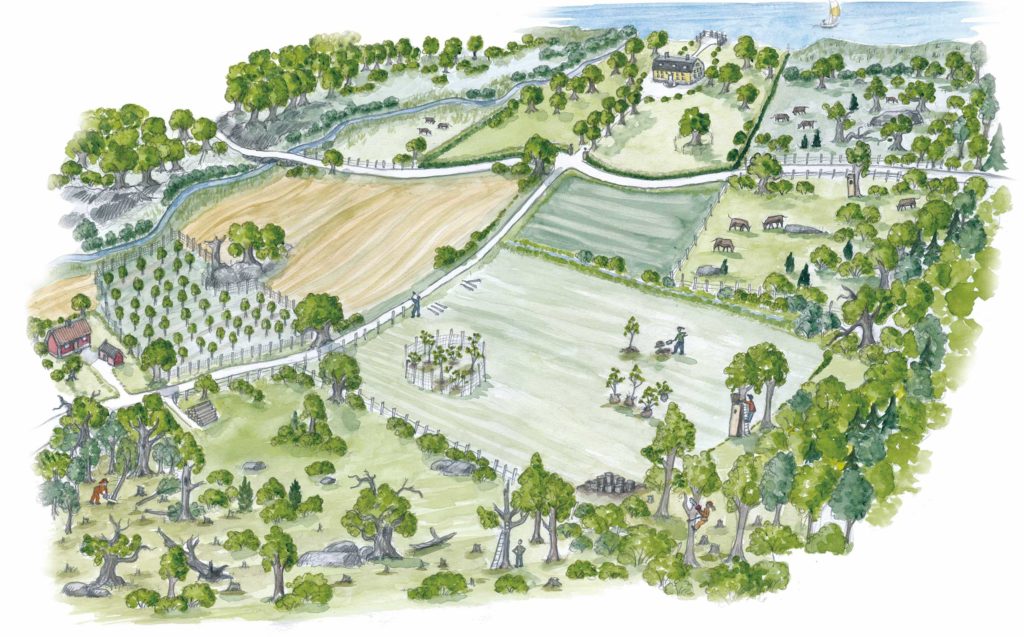 The oak after the Ice Age

Our knowledge of the trees’ advance and the woodlands’ composition is based almost exclusively on pollen analyses and macrofossils. These indicate that the tundra began to recede 8,000 to 10,000 years ago, and that deciduous trees made their entry from the south. During this period, there seems to have been a relatively rapid establishment of alder, elm, ash, lime, maple and oak. About 6,000 years ago, the oak reached its current northern limit in Sweden – the biological border with Norrland, Limes norrlandicus.

The climate 3,000 years ago was warmer than today. The woodland was dominated by deciduous broadleaf trees like oak, lime and hazel. In the eighth century, the deciduous broadleaf woodland began to recede, and pollen from various cereals increased. Then, over time, the composition of the woodlands shifted dramatically, with a dominance of birch and hornbeam, and then mixed coniferous woodland with spruce and pine, or beech-dominated woodlands. The oak has declined continuously over the past 4,000 years, with a dramatic drop over the past two centuries. The pollen levels of oak are now just 45-60 percent of what they were in the seventeenth century, and only 25-30 per cent compared to fourth-century levels.

The oak in recent centuries

The Swedish king Gustav Vasa decided in 1558 to introduce a regale, which gave the crown the exclusive right to fell oak, beech, and other trees that bear fruit, nuts or acorns on all land that was not owned by free men. This meant that the king acquired oaks growing on taxable land (farmers’ land), but also on crown land and the church’s land. Special permission was required to harvest oaks on this land because oaks were important for building warships. Naturally irregular forms were particularly desirable because they were more durable than sawn boards, hence not only oaks with straight trunks were of interest.

The nobleman or former military men who owned large properties enjoyed tax exemption. On such land it was permitted to harvest oaks, but because there was little demand for them, oaks became something of a status symbol. This meant that these oaks were left standing – and some remain standing today – even though there are far fewer old oaks on these properties too, but for different reasons. Prohibitions from the state have always been unpopular among landowners, and the exclusive right of the crown to fell oaks was no exception. So in time, the farmers came to hate the oaks. The oaks grew in the fields and meadows of the more fertile areas close to the farms, which reduced the harvest of the important meadow hay. Those who had enough hay could keep animals over the winter, so they would also have fertiliser for the fields. So, how did the farmers solve the problem of the oaks that they were not allowed to fell? In addition to felling the oaks illegally, they removed lower branches, which resulted in more light reaching the fields and meadows, without the oak dying immediately. Another strategy that was used to damage the health of the oaks and cause their eventual death was burning brushwood against the oak’s trunk, after raking the meadows in the spring.

Especially in the eighteenth and nineteenth centuries, the crown commissioned inventories of oaks that were suitable for shipbuilding. This development was catastrophic, and the number of oaks declined massively. In the inventory of 1790, all suitable oaks were marked with a so-called crown hammer: the bark was removed in two places and the trunk was marked. Many of these suitable oaks were subsequently damaged by decay, and the farmers grew even less favourable towards conserving them. A new inventory was carried out in 1825. By this time, the number of suitable oaks had dropped drastically (see figure below), especially in the most oak-rich county, Kalmar.

In 1830 the time had come: the restrictions on the oaks could be removed for a small fee when the oaks were inspected, prior to felling. The crown established a large plantation on the island of Visingsö; today it is a well-managed oak plantation, with trees approaching 200 years of age. Many hundreds of thousands, if not millions, of old oaks were felled, especially in southeastern Sweden, becoming firewood and fenceposts. Large populations of species that were common at the time were eliminated. Species associated with old oaks began to die out, and this trend continues. In the Halltorp Nature Reserve on the island of Öland, with the most red-listed woodland species in the country, the area of Halltorp-Ekerum now has just one per cent of the old oaks it formerly had.

The massive reduction in the number of suitable oaks also means that there were hundreds of thousands of decrepit, decayed old oaks in the more fertile areas close to the farms of southern Sweden. Thus, the landscape was incredibly rich in biodiversity, with all these old, decaying, hollow oaks in well-managed meadows.

Oak landscapes which are connected together, with large numbers of really old oaks can today be found mainly on land which in the nineteenth century was owned by nobility, and where felling oaks was not prohibited. A large portion of the land that was suitable for oak woodland has become fields, been ditched, or been planted with spruce. The oak landscape on Gotland was eradicated completely because there was no land owned by nobility there. The number of young oaks in woodland has fallen since the 1980s due to increasingly dense woodlands and a high grazing pressure from wild animals.

Thanks to the large national inventories of harvestable oaks that took place in the eighteenth and nineteenth centuries, we know that today’s oak landscapes and oak-rich woodlands constitute only a very small proportion of the number of oaks that existed two centuries ago.

Since the early 1950s, the total volume of oaks has increased, probably because the number of large oaks has increased. However the situation looks worse for young oaks, which have fallen in number since the 1980s. If we make a concerted effort to restore overgrown oak habitats, and favour oak in woodlandry production, we still have a chance to save our valuable oak landscapes, and all of their species.

03. Species and ecology of oak habitat
01. Life Bridging the Gap