A stag beetle loggery consists of a number of logs that are partially buried in the ground, and covered with wood chips and shavings. It resembles the natural habitats where the stag beetle lays its eggs, and is created for the benefit of the stag beetle and many other species. Illustration: Katarina Månsson, BrizaNatur 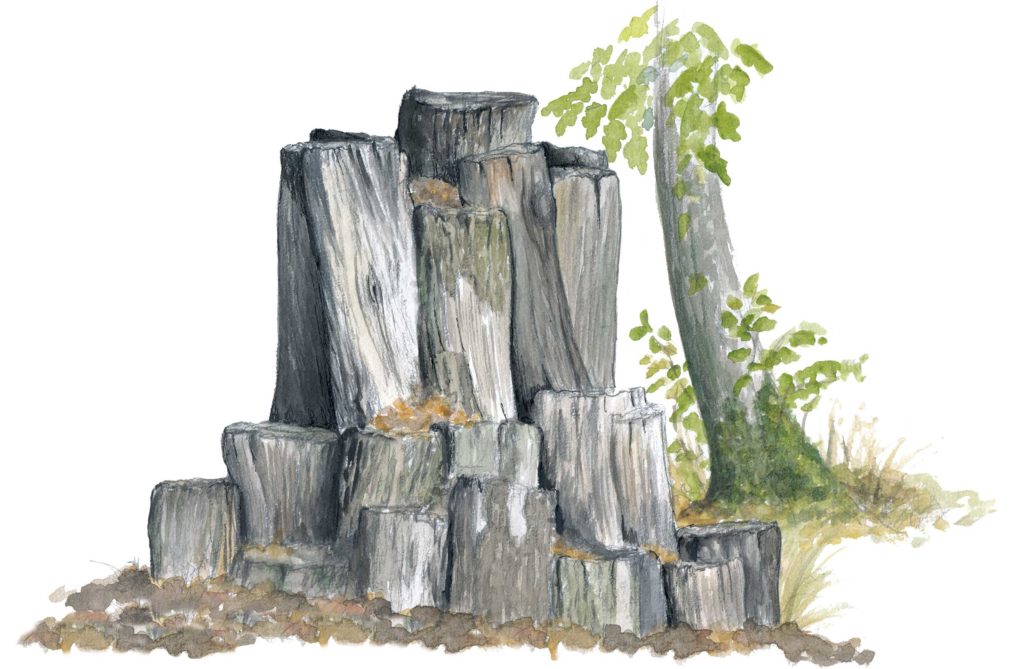 The stag beetle is Europe’s largest beetle. Males can grow to nine centimetres in length, and females around four centimetres. It is uncommon in most European countries and is a responsibility species for the EU. In Sweden the stag beetle is relatively common in certain areas, especially in the southeastern parts of the country (Östergötland, Kalmar and Blekinge counties) – however it used to be more common. The heat-loving stag beetle has been adversely affected by an increasingly closed landscape, without silvopasture and dense spruce forests, and by forestry. During the past century, forestry has been focused mainly on conifers, which has led to a shortage of thick fallen deciduous trees and large deciduous stumps. Of course, this also impacts the stag beetle which lives on deciduous tree roots and coarse, rotten deciduous tree stumps.

Flies for a few weeks, after five years as a larva

Stag beetle larvae develop for a long time – four to five years. The females lay the eggs deep in the soil, alongside the root flare or underneath heavy logs of various deciduous species – particularly oak, beech, birch and hazel. The larvae eat the rotten wood, initially at the surface level, but as the wood becomes more rotten, the larvae make deeper tunnels. Normally the stag beetle is present in the wood below, or just above, ground level. After four years the larva is ready for the pupal stage, and in late summer it glues soil and wood fragments together, to form an egg-shaped cocoon. The stag beetle is hatched as a fully formed beetle already in the autumn, but remains in the cocoon until late May or early June of the following year.

For a few weeks in June, the stag beetles are most numerous: they can be seen flying at dusk on warm evenings. When the males are out flying, and looking for females, they are exposed and are often quite quickly taken by predators like woodpeckers and crows. Stag beetles often congregate around sap flows on trees where they lick up the fermenting sap, the males fight, and the winners get to mate with the females.

The location of the stag beetle loggery must be selected with care, as this can have a huge effect on how well the loggery works. Preferably, it should be located on a south-facing slope, with light, well-drained soil, because the stag beetle’s larvae like dry, warm places. It is also good if there are trees and bushes close by; these function as protection from crows and other predators, and as starting and landing points for the beetles, when they take to the air at dusk.

After selecting a location, dig a shallow hole (30–50 centimetres), which should preferably slope. If the soil is compact, there should also be drainage, so water doesn’t collect in the hole. Position logs of oak, beech, birch and/or hazel in the hole. Length and girth may vary, but a length of 50-150 centimetres is often suitable. If there are no trees nearby, a few longer logs can be used, from which the stag beetles can commence their flight. To hold the logs in place, and to prevent wild boars from digging up the logs as they search for stag beetle larvae or cocoons, strapping can be secured around the outermost logs. Finally, the remaining spaces around and between the logs are filled with shredded leaves, deciduous wood chips, or sand. Then it can all, if desired, be covered with a layer of soil.

The female stag beetles appear to be able to come to the loggeries to lay eggs already during the first season. For this reason it is good if construction of the loggery is finished in late May, when the stag beetles start to be active. The loggeries can also be used by many other beetles that live in wood such as the green rose chafer, rhinoceros beetle and Ampedus nigroflavus.