Hollows in old deciduous trees are important homes for many threatened insects, but they are in short supply. As we wait for the next trees to become old and hollow, these species require support in the form of temporary housing. A wood mould box resembles a birdhouse, but is for insects. The idea is to copy the conditions present in tree hollows. 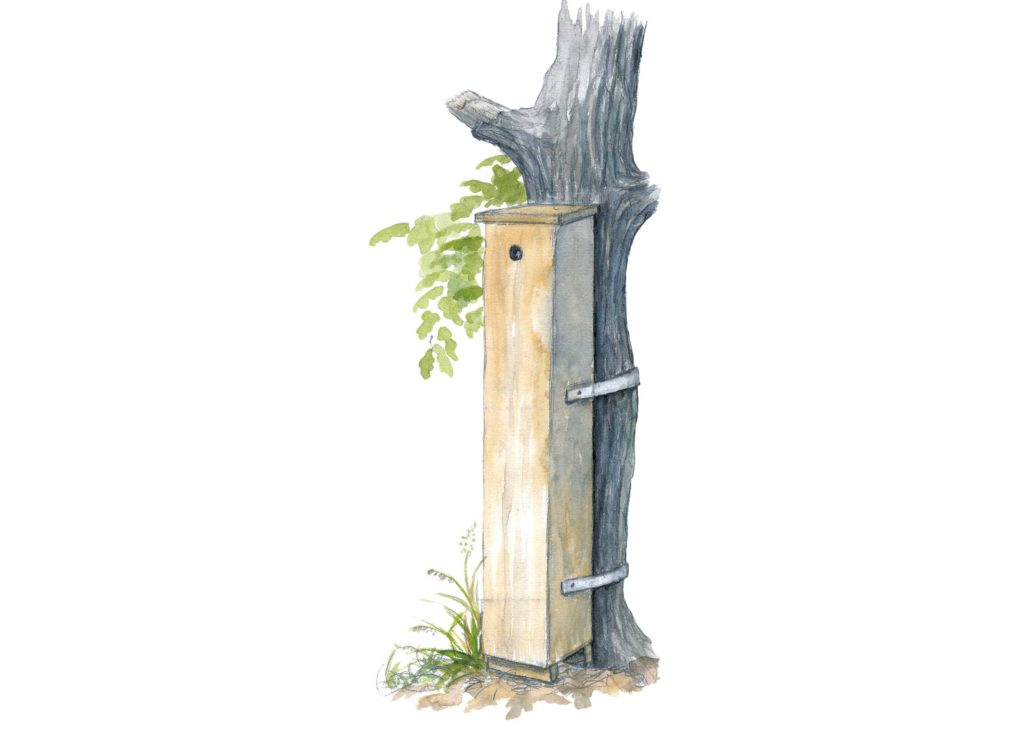 As oaks and other deciduous trees age, they often develop hollows in their trunks. These holes arise when the conditions are right for wood-living fungi to begin the rotting process inside the trunks. This happens for instance when a thick branch dies or when bark is damaged. Depending on the fungus species, the fungi break down and soften up the wood – either by breaking down the cellulose so that brown rot is created, or by breaking down both the cellulose and the lignin so that white rot is created. Both processes make it easier for pecking birds and insect larvae to create holes. Research shows that for oaks, this process begins when the trees are about 250 years old, but for other tree species in northern Europe, it starts earlier. A large number of specialized insects live in rotting trees, and in fungi’s fruit body and mycelia.

The most exclusive environment is the wood compost that forms inside the tree trunk – this is called wood mould. In large trees it can reach volumes of several cubic metres. Wood mould consists normally of a mixture of wood fragments, fungi fragments and remains of old bird nests and insects. It’s primarily a home to beetles, but rare hoverflies, crane flies and pseudoscorpions are also included in the complex network of species that live in wood mould.

Because old hollow trees are uncommon in most places, today this fauna is rare and threatened. With few suitable trees spread out in the landscape, gaps in both time and space emerge, that is, an uneven age distribution with a lack of middle-aged trees and large distances between the old trees. It often takes a long time to fill these gaps naturally, which means that in the meantime, species risk disappearing.

Who wants to live in a wood mould box?

Studies in Sweden have shown that it is possible to imitate some of the microhabitats that exist in hollow trees: in one area, 70% (52 of 82) of the beetle species that were found in hollows in old oaks were also present in boxes filled with oak chips and dead oak leaves. Another important lesson from these studies is that the higher the humidity, the more two-winged insects such as crane flies and hoverflies colonize the boxes. It also emerged that the species not found in the boxes are highly dependent on brown rots (which are created by e.g. sulphur polypore and beefsteak polypore) and on that type of wood mould.

During the 15 years that wood mould boxes have been studied, the hermit beetle was found in just 7% of the boxes. This can be compared with the taxonomically related marbled rose chafer (Protaetia marmorata), which lives in the same environment, and was found in 37% of the boxes. The most probable reason for this is that the marbled rose chafer is a stronger flyer, and more quickly finds suitable habitats. Other species that have been common in the boxes are clown beetles, rove beetles, hide beetles (Trox scaber), Prionychus ater and whitemarked spider beetles (Ptinus fur), but also a few rarities such as the Moccas beetle (Hypebaeus flavipes) and the spotted hairy fungus beetle (Mycetophagus quadriguttatus) have been found.

The wood mould boxes can be used in several ways, but the most obvious is to locate them in areas with a shortage of hollow trees or in areas where the age differences between the hollow trees are too great.

But it is also possible to help the species spread to new areas with suitable habitats by placing the boxes as what are called ‘stepping stones’, important habitats that connect these areas, to bridge the spatial gap caused by the fragmentation of oak woodlands. A third, untested way of helping the species in a landscape is to first let the boxes be colonized in a species-rich area, and then move the boxes to less species-rich areas.

The wood mould box in LIFE – Bridging the Gap

The type of box used in the aforementioned research studies was quite small, 70 litres, and was positioned 4 metres up the trees. The box designed in LIFE – Bridging the Gap is almost 10 times larger (50x50x250 centimetres) and was positioned on the ground, fastened to a tree. It is made of pine and oak, and is filled to 80% with equal parts of oak chips/shavings and oak leaves. Also, 20 litres of water has been poured into it from above. The roof is designed so that it lets in a little rainwater through two channels that end at drilled holes at the corners of the roof. This creates a variation of moisture levels in the box, and more species can find their favorite environment. To retain moisture during dry periods, a piece of tarpaulin, shaped like a bag, is laid in the bottom of the box.

In the upper part of the wood mould box is a hole (6 cm) that allows birds to enter the box and build nests. When making entry holes in a wood mould box, the size can be varied to accommodate different birds. Some of the boxes have a section for baths. The box can be positioned on a concrete pad or on oak beams to reduce dampness on the outside and to slow the rotting of the wood in the lower part of the box.