In veteranization, you damage healthy young trees in order to create structures that are normally formed in older trees. Veteranization functions as a ‘lifeboat’ for endangered species, by relatively quickly creating habitats in young trees. In areas with few old trees and large age gaps between trees, the method can be crucial to the long-term survival of large numbers of endangered species. 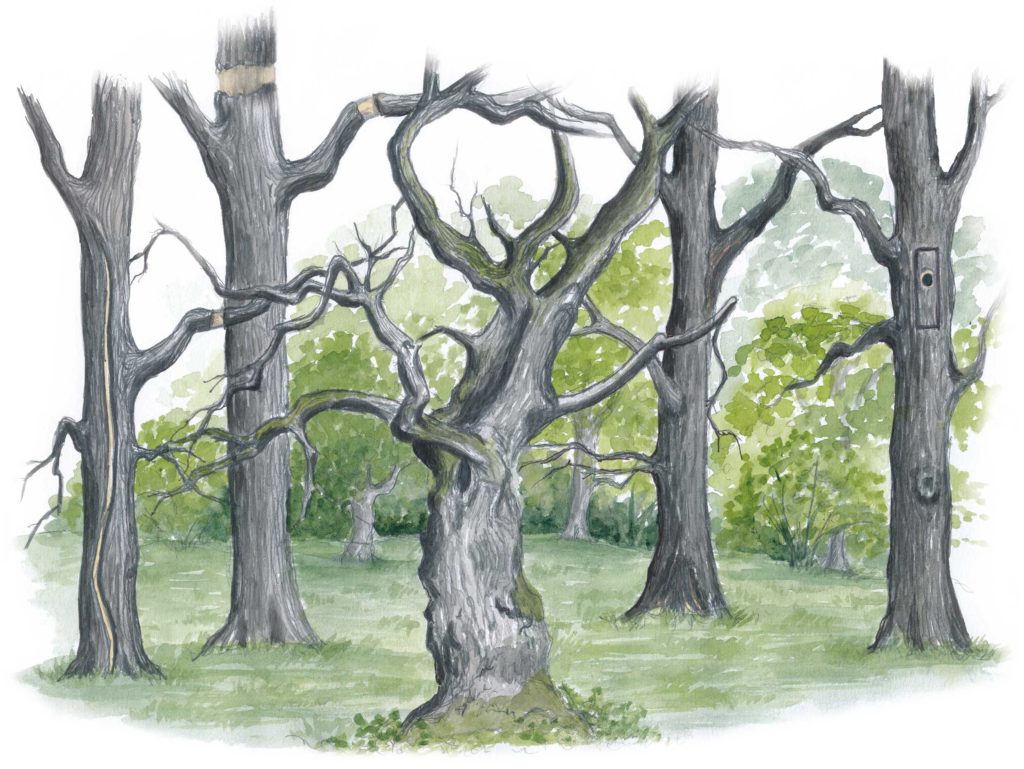 Veteranization as a conservation method

Veteranization involves intentionally damaging middle aged trees in order to create structures, substrates and micro-environments that are normally formed in old trees. Examples of structures often found in older trees, but rarely in young ones, are cavities with wood mould (often found in hollow trees), thick branches that have died or been broken off, large sections with bare wood on the trunk – often gnawed off by horses or beavers, and damage from lightning strikes and woodpecker holes. In oaks, cavities like these are not formed until an age of about 200-250 years.

The concept of veteranization originated in the United Kingdom, where individual trees were veteranized on a trial basis in the 1990s. Veteranization of younger trees is nowadays an option and a complement to simply clearing in many conservation-related interventions. In the project LIFE – Bridging the Gap, veteranization is often used in stands where there are plenty of middle-aged oaks, and in stands where there are middle-aged deciduous trees growing close to oaks. It is often better to damage these middle-aged trees than to fell them. This method benefits the old tree, while the adjacent middle-aged tree can provide the habitats that otherwise would have been lacking in the area for a long period.

Killing entire trees by felling or girdling can often be an appropriate conservation method when the aim is to benefit species that are reliant on dead wood, but it should not be mistaken for veteranization.

Species that benefit from veteranized oaks

Bats and hole-nesting birds benefit immediately from cavities created in living trees. The same applies to insects that live in hard, sun-exposed dead wood on living oaks, such as the ship timber beetle. On the girdled tops of oaks, the bark is quickly peeled back by hungry woodpeckers hunting for bark beetles and longhorn beetles that live in freshly dead wood. In the long term, many other species benefit when fungi start to create rot in newly formed cavities. This applies for instance to many species of wood-living beetles, crane flies, flies and pseudoscorpions. In areas where the old trees are few and there is a large age gap between the oldest trees and the next generation of trees, veteranization could help counter the so-called extinction debt.

Veteranization of trees is not a new phenomenon; obviously, trees have been damaged both intentionally and unintentionally throughout history. For instance, pollarding used to be widespread in Sweden, particularly with ash and linden, but also birch, oak and other varieties. As a result of pollarding, a practice previously common in Europe, humans have continually created cavities, rot and dead wood in living trees – both young and old –over centuries. There is much evidence that such trees have been very common in many European landscapes.

Centuries ago, old oaks often stood in meadows and pastures, which obviously led to reduced harvests of both hay and grain. Furthermore, from the year 1558 to 1830, it was prohibited in Sweden to fell oaks on crown land or taxed land. Se the chapter The oak in history. Hence the farmers pollarded the oaks in order to maximize the light that reached the ground, without breaking the law. Many of the (biologically speaking) finest hollow oaks found today in southern Sweden were probably pollarded during the 18th or 19th centuries.

For various methods of veteranization, one should look to nature’s own processes. It is often hard to distinguish the damage created in these methods from the way nature itself creates substrates, such as trunk and branch fractures. In nature it is storms, snow, fire, lightning strikes, tree falls, fungi, woodpeckers, gnawing and rubbing animals that make holes, break branches, peel off bark and thus create the required structures. Before humans eradicated large herbivores like Irish elk, aurochs, wild horses and European bison, these animals also played a key role, not only in creating a mosaic heterogenous landscape, but also by using trees and other woody plants in various ways, often damaging them.

Specialized fungi do the job

When a tree is damaged, it’s the fungi that, together with microorganisms and insects, do the big job of creating habitats in the tree. In oaks, certain fungi are specialized at living in the sapwood, while other species are at home in the heartwood. We call these fungi ‘heartwood-decay fungi’, and some species of them are specialized at breaking down cellulose. They create a rot consisting mainly of the red wood substance lignin. We normally call this rot ‘brown rot’. Examples of fungi species that create brown rot are sulphur polypore, oak mazegill and beefsteak polypore. Other heartwood-decay fungi species break down both cellulose and lignin, and create what we normally call white rot. An example of such a fungi species is Phellinus robustus.

Fungi in trees – a hidden history

We know too little today about what controls wood fungi’s succession, niche differentiation and growth dynamics, but these processes are probably crucial to the huge diversity of species that follow different types of rots. Getting one or more species to form rot and cavities ‘on demand’ is more difficult than one would think, and takes a long time. Trees are far from defenseless against decay, and fungi can be latent inside trees for very long periods, without developing rot. Even if veteranization is one method for accelerating the formation of important habitats in trees, these are unfortunately slow processes that we are now able to learn more about by way of directed studies.

Our knowledge of this is only in its infancy, but will develop considerably over the coming decade.